American actress,Virginia Grey born this day, March 22, 1917 in Los Angeles, California, made her debut into films at the age of ten in the silent film, Uncle Tom’s Cabin (1927) in the role of Little Eva. 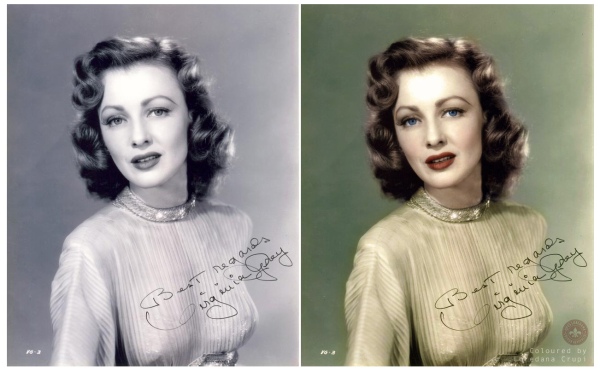 Though she worked steadily throughout the 1930s and 1940s, she found herself always playing leading parts in “B” grade pictures and supporting roles in “A” grade pictures. A veteran of over 100 movies and 40 television shows; musicals, comedies, adventure films, westerns and romantic dramas, M.G.M. studio head, Louis B. Mayer once told her, “You have everything but luck.”

According to actress, Anne Rutherford, ”She could play the girl next door or somebody’s other woman. And that was what kept her working.”  She worked at almost every studio in Hollywood and was a regular on television throughout the 1950s and 1960s, before retiring from show business in 1970.

For Grey, it was a case of …always the bridesmaid and never the bride, both on and off screen. Off screen, she was romantically linked with Clark Gable for much of the 1940s, but theirs was an on again/off again relationship attracting constant publicity.

After the death of his wife, Carole Lombard in 1942, Gable and Grey were frequently seen out together. Everyone especially the tabloids expected them to marry. But Gable surprised everyone and broke Grey’s heart when he hastily married Lady Sylvia Ashley in 1949. That marriage lasted barely three years. Following his divorce in 1952, Gable tried to take up from where he had left off with Grey. Though she still loved him, their romance  was never rekindled. Grey never married, vowing never to let herself become too close to a man again. According to friends, Gable was “the love of her life and she never really got over him.”

She never spoke about her relationship with Gable except when she was pressed to talk about her affair in an interview in 2003. The only comment she would make was,  “I adored him, I always will.”

Virginia Grey died of heart failure the following year (2004) at the age of 87.

“I consider myself a professional who acts — not to express my soul or elevate the cinema — but to entertain and get paid for it.”   ~   Virginia Grey