Posted on January 6, 2015 by Loredana Isabella

Born this day, 6 January 1913, in Salt Lake City, Utah, Loretta Young, was one of Hollywood’s most glamorous screen goddesses of the 1930s and 1940s. Her career spanned the entertainment gamut from the end of the Silent Era through to the Golden Age of Hollywood and then onto the Golden Age of Television.  A talented star, she became the first actor to win both an Emmy and an Academy Award; a Best Actress Oscar for The Farmer’s Daughter (1947). 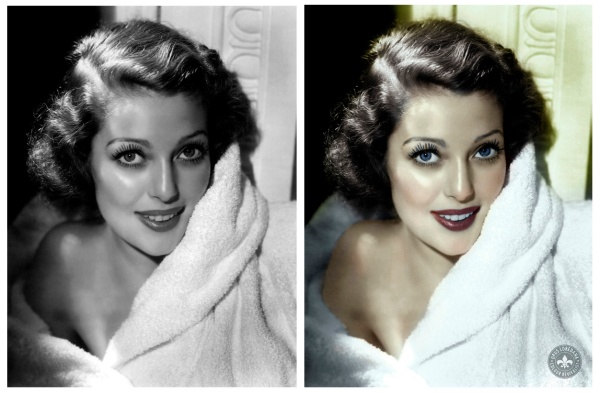 With 88 movies under her belt, she invariably played strong-willed heroines with firm principles, an image she worked particularly hard to portray in real life as well. It was a long time then before anyone got wind of her child born out of wedlock and conceived after an affair with a married Clarke Gable, while they both filmed The Call of the Wild.

Young, a strict Catholic, successfully avoided the talons of Hollywood’s gossip columnists by spending most of her pregnancy in Europe. In 1935 she gave birth to her secret love child who was soon turned over to a series of caretakers, including St. Elizabeth’s Infants Hospital in San Francisco, so that Young could return to the business of being a star. Two years later she pretended to ‘adopt’ her own daughter.

In 1994 that daughter, Judy Lewis, reveals in her autobiography Uncommon Knowledge, that all her young life she had remained in the dark about her parentage despite the rumour mill. She grew up believing she was adopted. So when she confronted her mother at the age of 31, Young finally admitted the truth;

“Well, he was your father. He was darling. Sweet and very gentle. He was married, so when I discovered I was pregnant with you, I was frantic and terrified. It would have ruined both our careers, a scandal like that.”

Years later after Lewis released her memoir, Young refused to speak to her daughter for three years. In an interview just after her book was published, Lewis also quoted Young explaining her decision to give birth;

For Young as a devout Catholic, the scandal of having an illegitimate child was too much to bear. It would have tarnished her saintly reputation and most likely have ended her career but this makes you wonder who she feared most, her God or her Hollywood?

Although she divulged the truth to her daughter, Young in public remained steadfastly mum. She did eventually acquiesce to acknowledging the facts in her authorized biography, Forever Young: The Life, Loves, and Enduring Faith of a Hollywood Legend but only on the condition that it be published after her death. She died in 2000.

Young’s saintly halo never quite sat right on her head. By Catholic standards she didn’t really have the prescribed prerequisites for a smooth entry into God’s Kingdom.

As often happens in Hollywood, Young fell in love with her leading men.  In 1929 she was playing opposite 25-year-old matinee idol, Grant Withers in Second Floor Mystery.  She had only just turned 17 when they decided to elope. And As often happens in Hollywood,  nine months later they were divorced. Ironically they were working together on the movie Too Young to Marry.

Young never spoke of the marriage, and it never appeared in her official biography. A second marriage in 1940 to broadcast executive, Thomas Lewis, which bore her two sons, also ended in divorce.

In 1993, at the age of 80, Young married her long standing friend and fashion designer Jean Louis after the death of his wife who was also her close friend. He was 85. She told Daily Variety: “We’ve known each other for so long. And when something is right, it just slips into place.”

Young devoted herself to religious charities throughout her career and into retirement especially her favorite causes, including a home for unwed mothers and a children’s foundation until her death at age 87 on August 12, 2000 from ovarian cancer. Her ashes were buried in her mother’s grave.

Between 1953 and 1963, she appeared in more than 300 episodes of The Loretta Young Show. Today I leave you with this short montage which features her much-satirized trademark of sweeping through a doorway at the start of each episode always in a Jean Louis high-style gown and curiously ends with the proverb “A gracious woman shall always find her glory”

“I don’t believe in horror stories for women and I wouldn’t play a part like that if I were starving.”  [when offered the role of Miriam in Hush…Hush, Sweet Charlotte (1964) after Joan Crawford became ill]