Posted on November 13, 2014 by Loredana Isabella

Today marks the anniversary of the death of one of the world’s finest composers 146 years ago. Born in 1792, Gioachino Antonio Rossini was an Italian composer who wrote 39 operas as well as sacred music, chamber music, and some instrumental and piano pieces.

Often referred to as ‘The Italian Mozart’ for his signature song-like melodies, Rossini up until his retirement in 1829, had been the most popular opera composer in history. 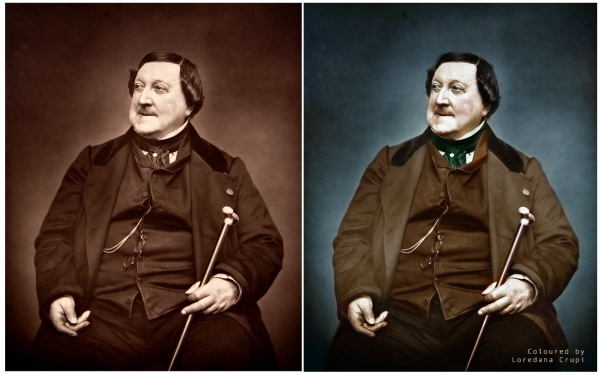 Once Rossini retired from composing, he indulged in his life long passion for good food. Stories abound of his love for food. One anecdote suggests that Rossini only ever wept three times in his life. The first time was over the shellacking of his first opera, the second when he heard Paganini play the violin and the third was when, on a day’s outing on a boat his picnic lunch, a turkey stuffed with truffles fell overboard.

Rossini had developed quite a reputation as an amateur chef and gourmand.  Well known gastronome and American author, Waverley Root described Rossini as “the greatest example of a man who could have become a celebrated gourmet if only his musical genius had not eclipsed his gastronomic talents.”

Rossini played with the same gusto in the kitchen as he did on the piano. When you see a dish with the appendage ‘alla Rossini’, you can be sure that it was either created by him, such as his tasty Beef Marrow Risotto alla Rossini, or specifically for him as was the popular French steak dish, Tournedos Rossini. Just about every dish he created contained liver and foie gras, his favourite ingredients which perhaps accounts for his robust frame.

And then there’s his famous aperitivo, Rossini Cocktail!

Rossini died at his country house at Passy on this day, November 13, 1868 at the age of 76. He was buried in Père Lachaise cemetery in Paris, however nineteen years later in 1887, the Italians wanted to reclaim their son and so his remains were moved to the Basilica di Santa Croce, in Florence, at the request of the Italian government.

According to the Oxford History of Western Music, “Rossini’s fame surpassed that of any previous composer, and so, for a long time, did the popularity of his works. Audiences took to his music as if to an intoxicating drug – or, to put it more decorously, to champagne, with which Rossini’s bubbly music was constantly compared.”

So pour yourself a Rossini cocktail and have a listen to the Overture of The Barber of Seville and make up your own mind.

“One thing I believe I can assure you: that of my works, the second act of Guglielmo Tell, the third act of Otello, and all of il Barbiere di Siviglia will certainly endure.”  Gioachino Rossini