Posted on October 19, 2014 by Loredana Isabella

In 1986 the Western Stand of the Melbourne Cricket Ground was christened the ‘Ponsford Stand.’ Why? And who was Ponsford anyway? Ponsford the man, passed away in 1991 and I’d bet my bottom dollar anyone born after 1990 (the year Collingwood took out the AFL Premiership!) wouldn’t have a clue who this man was, unless of course they are cricket aficionados.

Born this day, October 19, 1900, in North Fitzroy, Victoria, Bill Ponsford, was one of the greatest run-making machines of Australian cricket in the 1920s and 1930s. His eloquence with the bat has been matched by few and his partnerships with Don Bradman have gone down in record books as monumental feats of run-making. 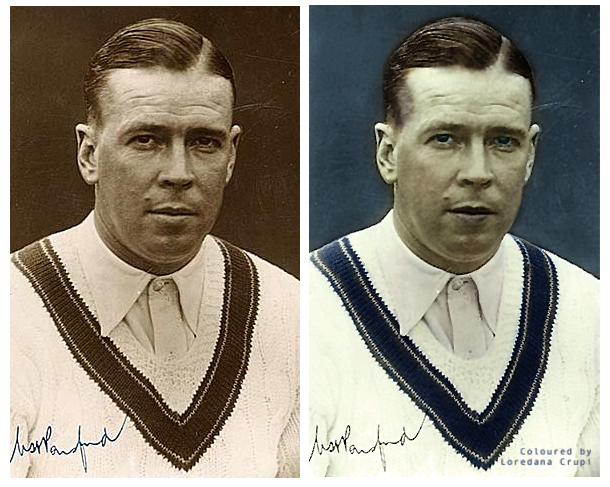 Interestingly, Ponsford only agreed to the renaming of the Western Stand as long as he was not required to participate in any public appearance or media interview. Not for any reason other than he was an intensely shy man, although as his son pointed out, his father was ‘tickled pink’ by the honour.

The man could play! But despite his superstar performances on the field, Ponsford was so reserved that when photographed, he would hang his head so his cap would cover most of his face. This shyness became more acute after his retirement as he would go out of his way to avoid being recognised by the public. After retiring from Cricket, Ponsford had a job at the MCG for three decades, involving ground operations for Australian rules football and cricket matches. According to John Leckey, in Records are Made to be Broken: The Real Story of Bill Ponsford (2006) Ponsford disliked interaction with the public. ‘He would often walk along lane-ways to his work at the MCC, rather than be recognised on the way to the train station. While on the train, he would cover his face with the newspaper.’

Ponsford was such a prodigious run-maker, he was the first to exceed 1000 runs in a domestic season and in one extraordinary December he amassed 1146 runs in five innings!

In his debut Test in 1924 Ponsford  scored a century and repeated the feat in the second Test.  Ten years later he did the same with his farewell innings in England making 181 and 266 runs, both in record partnerships with Bradman. He played in 29 tests from 1924 to 1934 scoring 2122 runs with a batting average of 48.22. He was only 33 on retirement and still performing at his peak.

Although the Ponsford Stand was demolished in 2003, its replacement was also named the WH Ponsford Stand. In 2005, Ponsford joined a distinguished group of  sporting champions when his statue was erected outside the MCG.

In 1982 he was made a Member of the Order of the British Empire (MBE) for services to cricket. And again in recognition of his contributions as a player, Ponsford was one of the ten initial inductees into the Australian Cricket Hall of Fame in 1996.

“Ponsford…can look back upon his career with the greatest personal satisfaction. In the course of roughly twelve years he has accomplished many remarkable performances and his name will go down to history as one of the most consistent run-getters in the game. If tending towards the end to lose some of his pace he was, for a long time, splendid in the deep field and, like nearly all Australians, could throw beautifully.”    –  Wisden Almanack –  Cricketer of the Year 1935