Posted on September 20, 2014 by Loredana Isabella

Born this day, on September 20, 1880, in Warialda, N.S.W. Australian nurse, Elizabeth Kenny was somewhat of a worldwide celebrity in the early 20th century, albeit a controversial one as a result of her healing methods in the treatment of ‘infantile paralysis’ (poliomyelitis).

Her work was recognized in the USA and euologised in the 1946 movie Sister Kenny, starring Rosalind Russell, who won an Oscar for Best Actress that year. Whilst Australia turned her back on Kenny, she was adored by the American public who voted her the second-most-popular woman in the United States, after the first lady, Eleanore Roosevelt. 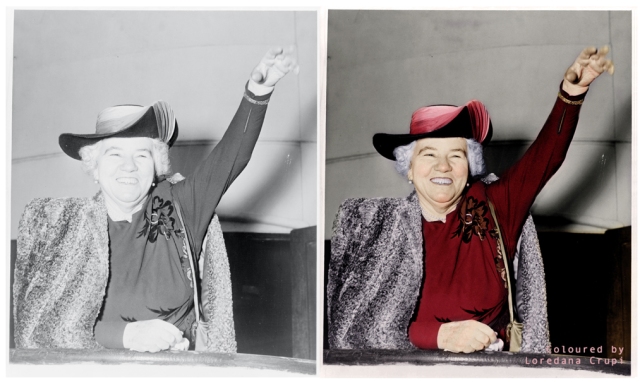 Although she was never a registered nurse, she initiated her own nursing practice, traveling by horseback, and later by motorcycle to visit patients in rural Australia. Kenny became known universally as Sister Kenny in 1917 after enlisting in the Australian Infantry Forces (AIF) with the Australian Army Nursing Service (AANS). During the war she served as a staff nurse on troopships carrying wounded soldiers back to Australia. In 1916 she was given the head nurse title ‘Sister’ and she ran with it. After a shrapnel wound to the knee and leg, she managed to survive the influenza epidemic of 1918. Soon after she suffered a mild heart attack and was treated in Germany before returning to Australia in 1919. Kenny received a British War Medal for her services to the war effort.

Back in Australia, Sister Kenny became involved in community life, setting up the Nobby chapter of the CWA (Country Womens Association) and becoming its first president in 1925.

In 1926 Sister Kenny invented the Sylvia ambulance stretcher, named after the first person carried on it. It was designed to reduce shock in the transport of injured patients. It was patented the following year and sold in many countries.

As early as 1910 Kenny had reported treating polio cases in the bush ‘back to normalcy,’ only to  be told by orthopedic surgeons at the time that her ideas violated the accepted rules for treatment. Rather than adopting the conventional method of immobilising a paralysed muscle in a cast or splint, Sister Kenny would treat the limb with powerful massage and heat packs to keep it mobile.

Kenny maintained that the physical manifestation of polio was caused by viral infection of muscle and other peripheral tissues, rather than by infection of the nervous system (which scientists suspected and which was later demonstrated). Although her work brought her into conflict with the medical establishment in Australia, Kenny persevered and in the mid 1930s, clinics for the treatment of polio victims were opened in Townsville, Brisbane & Toowoomba, where she was much loved by her patients and their families.

The Queensland Government paid for Sister Kenny to travel to the United States in 1940 to promote her treatment of polio. Sister Kenny won acclaim in the U.S. where they more receptive to her methods; a Kenny Foundation for the treatment of infantile paralysis was set up in Minneapolis. Despite the celebration of her work in the United States, Australia was still largely dismissive. Undeterred by the Australian ‘blockheads’,[1] she moved to the States, where benefactors established further clinics for her. Greatly admired in America for her work in this area, Kenny was acknowledged with honorary degrees and invited to deliver talks.

She recounts her life and work in And They Shall Walk in 1943; written with Martha Ostenso and in My Battle and Victory: History of the Discovery of Poliomyelitis as a Systemic Disease which was published posthumously in 1955.

In 1951 Elizabeth Kenny was diagnosed with Parkinson’s disease and returned to Australia retiring to Toowoomba, Queensland, where she died on 30 November, 1952, aged 72. Kenny was buried beside her mother in Nobby cemetery.

Eventually Kenny’s methods became redundant as polio vaccines invented in the 1950s, proved enormously successful in the prevention of the disease.

However her legacy lives on in the thousands of people whose pain she alleviated and who she helped to overcome the debilitating disease of polio.  M*A*S*H star Alan Alda states in his autobiography Never Have Your Dog Stuffed, that he has no question about the efficacy of the Sister Kenny treatments and credits her for his complete recovery from polio. Other well known celebrities who undertook the Sister Kenny treatment and recovered were opera singer Marjorie Lawrence and singer actress, Dinah Shore.

“A measure of victory has been won, and honors have been bestowed in token thereof. But honours fade or are forgotten, and monuments crumble into dust. It is the battle itself that matters – and the battle must go on.”   Sister Elizabeth Kenny  – And They Shall Walk

This entry was posted in Black & White, Colorization, Colourisation, History, Photography, Women, Women in Medicine and tagged Alan Alda, And They Shall Walk, Dinah Shore, Elizabeth Kenny, Infantile Paralysis and Cerebral Diplegia: Methods Used for the Restoration of Function (1937), Kenny Foundation, Marjorie Lawrence, My Battle and Victory: History of the Discovery of Poliomyelitis as a Systemic Disease, Never Have Your Dog Stuffed, Rosalind russell, Sister Elizabeth Kenny, Sister Kenny, The Kenny Concept of Infantile Paralysis and Its Treatment, The Syllvia Stretcher, The Treatment of Infantile Paralysis in the Acute Stage (1941). Bookmark the permalink.