Australian swimming sensation, Annette Kellerman was born this day, July 6 in 1886 in Marrickville, New South Wales. Kellerman was a professional swimmer and fitness advocate who went on to become a star of vaudeville and silent movies. She only took up swimming as a means to help overcome a disability. At the age of two Kellerman had contracted rickets and had to wear strengthening steel braces on her legs for the next five years.

Kellerman began taking her swimming seriously and in 1902 her family moved to Melbourne where at the age of 15 she broke the national record for the 100 yards in one minute, 22 seconds. Whilst still at school, Kellerman gave exhibitions of swimming and diving at the main Melbourne City Baths, and did two shows a day swimming with fish in a glass tank at the Exhibition Aquarium in Melbourne.* 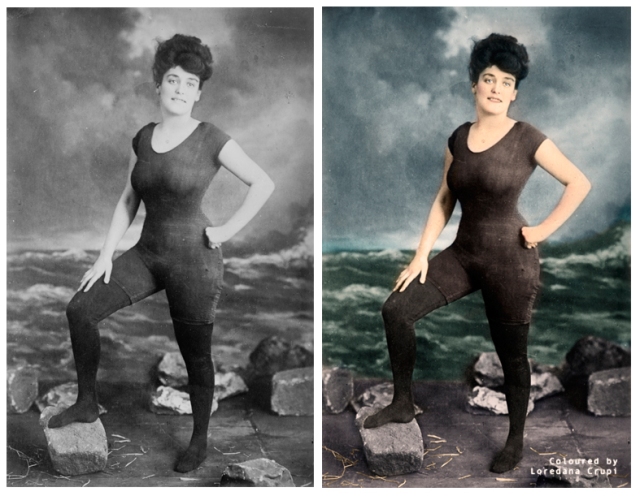 By 1905 Kellerman was one of the first women to attempt swimming the English Channel. Although she failed in three attempts, insisting it was brute strength she lacked rather than endurance or technique, she was beginning to attract wide media attention. Her marathon swimming feats 30 miles down the River Thames made her famous in Australia and England.  A celebrity by the age of 20, Kellerman became the toast of the London Hippodrome, where she was performing high diving vaudeville acts, swimming stunts and underwater choreography.

Soon afterwards she mounted a successful tour of the States, performing underwater routines in large transparent water tanks. She is often credited for inventing the sport of synchronised swimming after her 1907 performance of the first water ballet in a glass tank at the New York Hippodrome.

During this time Kellerman was pioneering the one-piece swimming costume and gaining notoriety for pushing the boundaries of ‘modesty’.  In 1907 in the United States, she was arrested on a Boston beach for wearing her one-piece swimsuit that revealed an ‘indecent’ proportion of her arms and legs. In the early 1900s, the norm for women when swimming was a cumbersome dress and pantaloon combination.

At around the same time a Dr Dudley Sargent of Harvard University had completed a study of 3000 women, and proclaimed Kellerman (163cm tall, with a 66cm waist and an 84cm chest) to be the perfect woman, as her torso so closely resembled that of the Venus de Milo!

In 1912 Kellerman married her American-born manager, James Raymond Louis Sullivan, at Danbury, Connecticut and soon after was picked up by Universal Studios. She appeared in a succession of aquatically themed movies beginning with Neptune’s Daughter (1914). She performed her own stunts including diving from ninety-two feet into the sea and sixty feet into a pool of crocodiles.

In 1916, Kellerman caused yet another stir when she became the first major actress to do a nude scene in a movie.  Audiences caught glimpses of her naked body in Herbert Brenon’s, A Daughter of the Gods during a waterfall sequence, in which she was ‘tastefully’ covered by her long tresses of seaweed.  This film for Fox Film Corporation, was the first ever million dollar film production. Sadly this is now considered a lost film as no copies are known to exist, (as is the case with several of her other films).

In 2004 Venus of the South Seas (1924) was restored by the Library of Congress and is the only feature film starring Annette Kellerman known to exist in its complete form. She has a star on the Hollywood Walk of Fame. In 1952, her career was commemorated in the Million Dollar Mermaid movie, starring Esther Williams as Kellerman.

Kellerman was a strong advocate for the benefits of swimming and built businesses around health and fitness.  She was a lifelong vegetarian and owned a health food store in Long Beach, California. The popularity of her one-piece suits eventually resulted in her own line of women’s swimwear.  Kellerman was also an author and wrote several books including How To Swim (1918), Physical Beauty: How to Keep It (1919), a book of children’s stories titled Fairy Tales of the South Seas (1926) and My Story, an unpublished autobiography.

Kellerman and her husband returned to live in Australia in 1970. Here she continued swimming and exercising until a short time before her death in 1975 in Southport, Queensland at the age of 89.  Kellerman was cremated and her remains were scattered in the Great Barrier Reef.

“There is nothing more liberating than swimming … All life’s shackles are washed away with the waves.”  Annette Kellerman

* Not to be confused with Melbourne’s current aquarium situated on the corner of Flinders Street and King Street, the Exhibition Aquarium was housed in Melbourne’s landmark Royal Exhibition Building.

Sadly the wing it was contained in burnt down in 1953. It is hard to imagine that Royal Exhibition Building with all its history and beautiful architecture was earmarked for replacement by office blocks! In the 1940s it became known derogatively by locals as The White Elephant. In 1948, members of the Melbourne City Council put this to the vote and it was narrowly decided not to demolish the building.