Day 22 of Colourisation Project – May 29th

On this day in 1953, mountaineer, Edmund Hillary and his sherpa Tenzing Norgay became the first people to reach the summit of Mt Everest in the Himalayas. The conquest of Everest was announced on the eve of Queen Elizabeth II’s coronation and upon his return to Britain, the new queen knighted Hillary. Born in New Zealand in 1919, Hillary was a beekeeper, like his father before him but he was also an explorer at heart and later on a philanthropist. 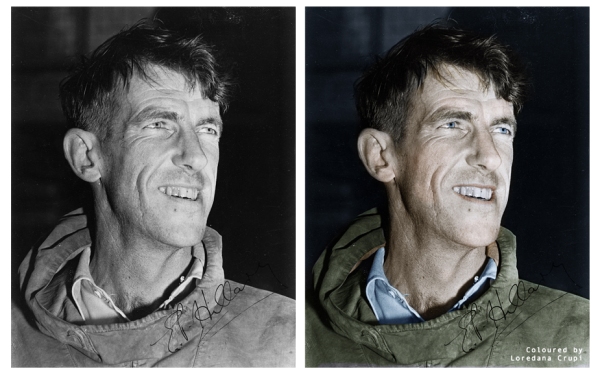 During World War II he served in the Royal New Zealand Air Force as a navigator. Having scaled New Zealand’s highest peak in January 1948, Hillary went on to climb ten other peaks in the Himalayas on further visits in 1956, 1960–1961, and 1963–1965.  As part of the Commonwealth Trans-Antarctic Expedition, Hillary reached the South Pole overland in 1958. He later also reached the North Pole, thus becoming the first person to reach both poles and the Everest summit.

Following his ascent of Everest, Hillary devoted most of his life to helping the Sherpa people of Nepal through the Himalayan Trust, which he founded. This Trust oversaw the building of many schools and hospitals in Nepal.

Hillary was named by Time as one of the 100 most influential people of the 20th century.

“I have never regarded myself as a hero, but Tenzing undoubtedly was.”  Edmund Hillary