Day 14 of Colourisation Project – May 21st

On this day 21 May in 1932, Amelia Earhart became the first woman to fly solo across the Atlantic Ocean.

She was an aviator, author, spokesperson and role model for young American women. She wrote best-selling books about her flying experiences and was instrumental in the formation of The Ninety-Nines, an organization for female pilots. She was also a member of the  National Woman’s Party, a party set up in 1913 to fight for  women’s rights during the early 20th century in the USA, particularly for the right to vote.

In 1937, she mysteriously disappeared while trying to circumnavigate the globe from the equator. Earhart is almost more famous for her disappearance than her achievements. There has been a lot written about this amazing woman, born in 1897 in Kansas, USA.  I think I will just let her records and achievements speak for themselves. 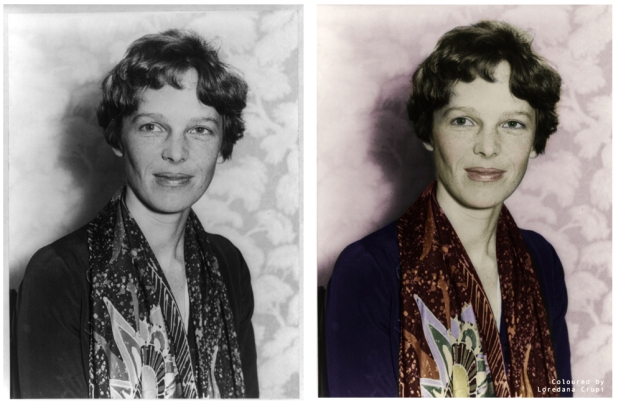 “I have a feeling there is just about one more good flight left in my system and I hope this trip is it.” (said to reporters before her last flight in 1937)”  Amelia Earhart